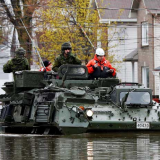 Censorship in US of A is only getting worst. An on going flood in Canada affecting its capital which makes Noah flood looks like a Sunday pool party in comparison. Yet not a peep of word is filtering through our fake media. Worst yet not even Canadian media is covering the horror and pain of their own citizens. UK just mention is passing “second person died” as if it was the end of the crisis. Canada a neighboring American country has its armed forces in and around its capital city and surrounded by death. Yet our fake media only cover “Trump” and his stupid shenanigan.

Like most American I have little to no interest in Canada. Expect for the fact when bunch of us end up in Montreal to enjoy local cuisine, and french women. Beyond that I don’t really care. However, this goes far beyond what’s happening in Canada. How many real issues not covered by media is anyone guess. Worst yet, this deliberate overflow of useless information is meant to confuse us so we do not walk out our Matrix prison.

Like it not our smartphone are digital handcuff. It is meant to enslave us. We foolishly allow our master to keep an eye on us, psychologically manipulate us. In past slave knew they had no freedom. At least their master let their slaves breath in a small cubical room where they could be with their thoughts. We have given up such luxury.

Here in West we arrogantly believe that we are living in a greatest digital age and our fake media keep us informed — unlike those 3rd world-er darky dark skin people. Yet we have the worst divorce. West that tried to “civilized” non-white have more single mother then anyone else in the world. Worst yet we are not willing to pry our hand from our smartphones to see how close we are to cliff before our master push us over the edge.