A picture is worth a thousand words. That’s why I decided to take the screenshot (link below provided as well). You decided if 80% of the #MeToo words have any teeth to bite on? Pouring further fire on flame, Rachel Maddow  brought further fake facts about a poor man accused of beating his wife. His wife was a closet lesbian, unhappy that “society” forced her to marry a man. Yet it was she who pursued him — just like this woman rapped her husband, and later dump him, and destroyed his career.

It’s Worth Mentioning Again, it was the wife who forced him to have sex with her, and locked him up for 29 hours.

So, how do feminists, conservatives, and their lap-dog liberals look at this story. Assuming if fake media even bother reporting it?

You see, according to Western Pro Feminist World View. Only man is rapist because he has a penis.

Notice how these ladies asked “am I really naive”? No you are racist towards men. Poor man was locked up, and forced to have sex with his insane wife. If it was in reversed — well we all know the ending than don’t we?

This is why we the men of the west should not get married. In our society only woman is a victim, not a victimizer. We men are like Blacks of South, they were lynched for looking at white women. Now men as a whole are being prosecuted for being men.

Take Bill Cosby. virtually every women who accused him could never have proven. Yet they keep going the same place where they were likely to be raped.

Wouldn’t you stop parking your car on a shady street if it was vandalized?

Speaking of abuse. Imagine man getting a divorce, and he tells the judge to ignore his million dollar Lamborghini? How do you think it would play during divorce proceeding? What if women has million dollar worth of shoes?

Read the following new & judge for yourself. Stealing money from husband is abuse too, but hey don’t expect traditionalist, and nasty liberal to take men’s side. 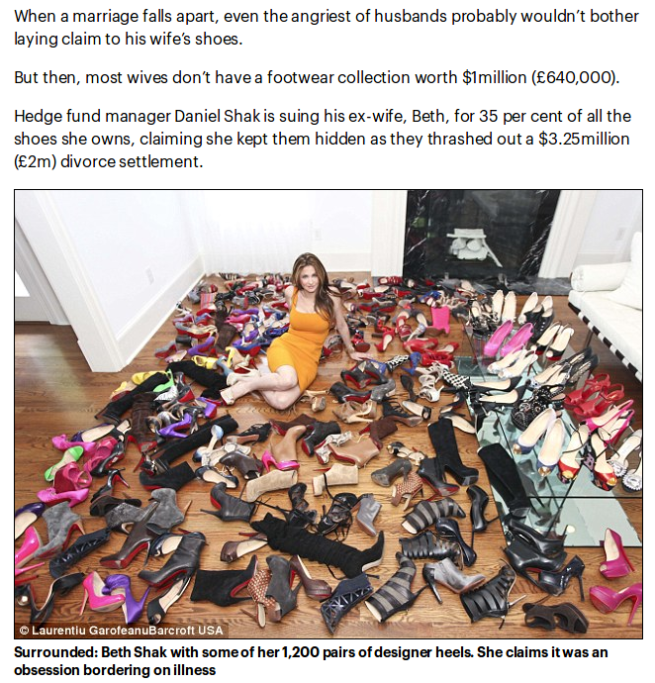 You can safely bet that her behavior is not consider financial rape. Media is making her hubby look like a jerk, and monster.

Being a father of a beautiful girl. I do worry about her finding her future husband, and what not. But let’s face it guys. Our solution lies in one simple fact: stay single, and don’t get married, nor get involve in any live-in relationship.

Simple life is a beautiful life.